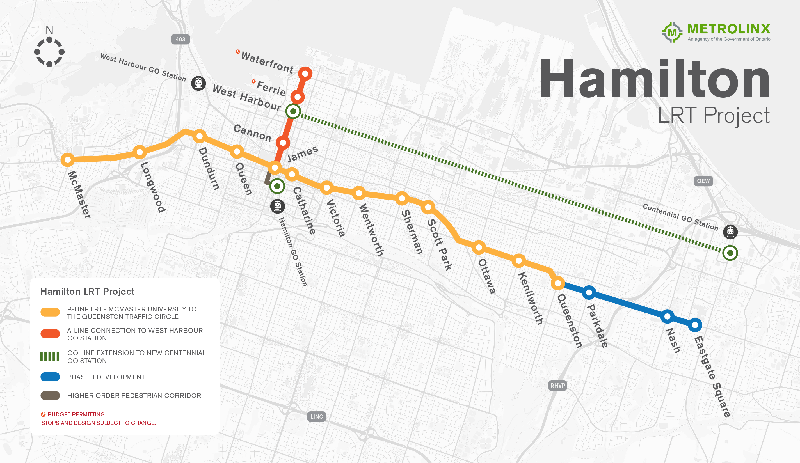 A year ago, on May 26, 2015, the Ontario Government announced full capital funding for light rail transit in Hamilton. This was a hugely exciting milestone after years of planning and advocacy, but there is still a lot of work to do before the project is completed.

Metrolinx, the regional transportation planning authority, is working with the City on a revised LRT design. The plan is for that design work to be completed and a construction contract signed by 2018, with actual construction to begin in 2019.

At the end of April, the City's LRT Office released their preliminary design report for the line, which will run east-west between McMaster University and Queenston Traffic Circle, and north-south between King and James and the West Harbour GO Station. 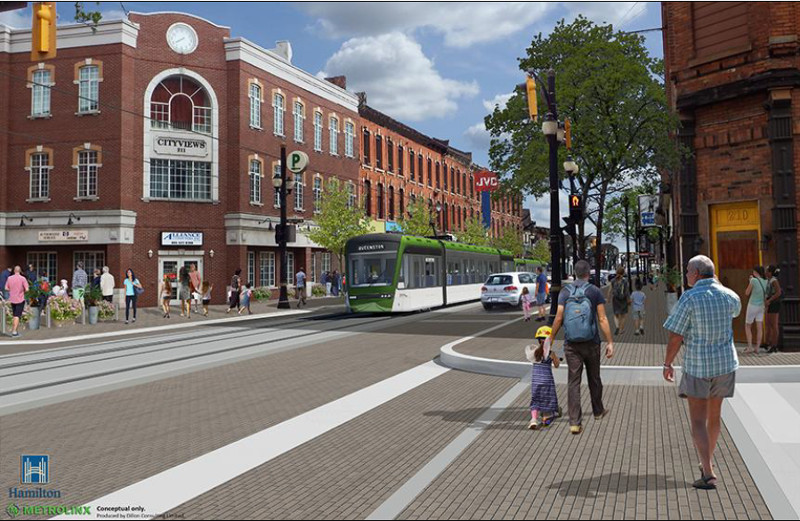 What should have been an exciting LRT Sub-Committee meeting turned acrimonious when Ward 5 Councillor Chad Collins sat in on the meeting and grilled city staff with questions designed to undermine confidence in the plan.

In response to a whisper campaign suggesting that Council support for LRT is not as strong as its steadfast history of votes indicates, Ward 4 Councillor Sam Merulla will introduce a motion at this Wednesday's Council meeting reaffirming Council's decision to accept a billion dollars in full capital funding for the LRT system.

The motion is mainly a formality to put the whisper campaign to bed and is widely expected to pass easily. As Ward 7 Councillor Donna Skelly, who does not favour LRT, put it, "[T]o reject $1 billion? I don't think anybody is that foolhardy."

However, it is always worth reminding Council and the Province that this transformational project enjoys broad support from Hamiltonians.

Please take a few moments to send a supportive message to Council and the Province:

Also, now that the preliminary LRT design is public, we are entering into a broad public consultation process and Hamilton Light Rail plans to get more involved and active in making sure that process is inclusive and reflects the best evidence in how to ensure success.

Remember that the Province is ultimately running this project. They are investing money in Hamilton because they believe, as do we, that Ontario can only succeed when Hamilton is succeeding as well.

There will be some important decisions to make over the next year about the specific locations of LRT stops, the line alignment down each segment of road, how to reconfigure the rest of the road network to support LRT and enable people to get around, how to invest in growing our bus transit system and feeding it more effectively into the LRT line, and so on.

It's vitally important that those decisions reflect our highest aspirations for the best outcomes, and not be driven by fear of change. That means we will need to get more involved in engaging with the City and Metrolinx.

As a result, Hamilton Light Rail will be ramping up its activities from now on after a quiet year of enjoying the Provincial commitment to full capital funding for LRT in Hamilton.

We hope you will join us on this road to a brighter future. 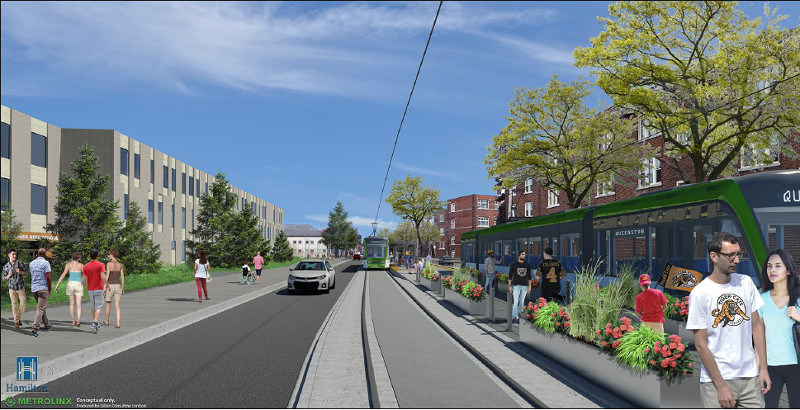 The approved LRT, and the upgrades to infrastructure that go along with it, are central to a worthwhile, sustainable, and environmentally conscious transit update in the city. Please consider the importance of honouring your commitment to help implement this project. Do not dismiss this based on projections which cannot be verified. A decision with an impact this immense demands an open discussion, with transparent cost details. After years of debate, over $160M already spent, and countless jobs on the line - this is the very least that our citizens deserve.