The $5.5 Billion Number Really Is Bogus

The more we learn about the Province's Hamilton LRT cost estimate, the less credible it looks. In fact, the third-party cost summary actually shows the project is within the Treasury Board-approved budget, and not over-budget as we were told! 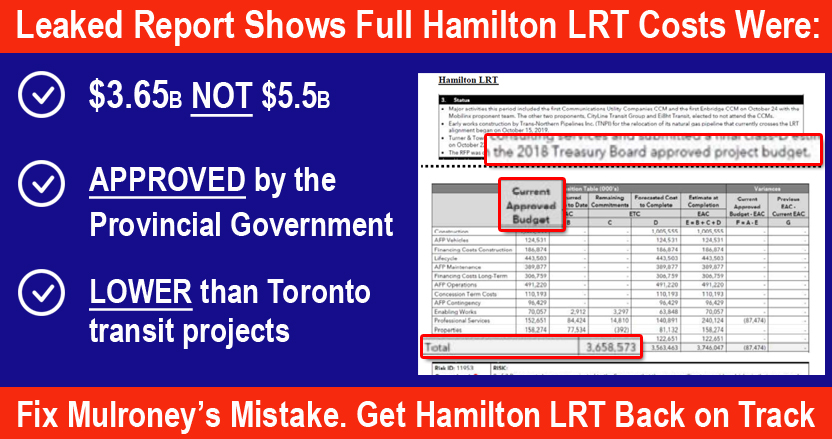 No one is willing to explain where the $5.5 billion number came from, but it looks exactly like a scary, made-up number meant to justify treating Hamilton's LRT project differently from every other project in Ontario.

The Province is moving ahead with a "task force" to look at how to invest in Hamilton transportation - including reviving the LRT. It's more important than ever for Queen's Park and City Hall to hear loud and clear that we expect them to keep their province.

Locally, the General Issues Committee is expected to receive a staff report on the LRT file. The meeting is this Wednesday, January 15, 9:30 AM at City Hall. The staff report won't have any recommendations, but it's possible a Councillor could introduce a mischief motion to derail or otherwise muddy Council's position on LRT.

So if you're available, please consider making an appearance in the City Hall gallery to remind them of why they supported LRT in the first place.

If you haven't already, please send a personal statement to the Province, calling on Premier Ford to fix Mulroney's mistake and get Hamilton's LRT back on track. In the past few weeks, our leaders have been flooded with personal statements and they're feeling the pressure.

Also, please forward this call to your family, friends and networks. The more people who speak up, the harder it will be for the Province to keep treating us unfairly.