Hamilton Light Rail (HLR), an independent grassroots organization with over 5,000 supporters city-wide, is urging the Hamilton Transportation Task Force to make LRT their top recommendation and to offer options to make the project feasible for the provincial government. 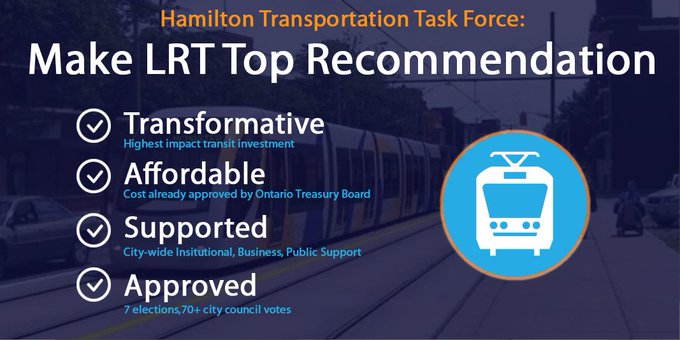 In a letter to the task force, the group points to the more than 12 years of analysis and research that went into planning Hamilton's LRT. Between the business case, feasibility analysis, and other planning documentation, the conclusion was crystal clear: LRT is the best transformative investment for Hamilton.

"What is important is that we don't squander this opportunity on a form of transit investment with less impact than LRT."

Accompanying the letter was a 300-page book compiling comments received since December 2019 by residents urging decision-makers to make LRT a priority. The sheer volume of comments demonstrates how much community support is behind this transformational project. Comment after comment received strongly urges the province to reverse this decision and implement LRT.

The letter concludes by urging the Task Force to listen to the community and, "through your recommendations, help provide the space for the provincial government to reverse their reckless and disastrous decision and get Hamilton LRT back on track."

Text of the Letter

As chair of the Hamilton Transportation Task Force, we wish to present you and your colleagues with the attached documentation from the Hamilton Light Rail Initiative (HLR) to assist in your important deliberations. HLR is an independent LRT grassroots organization with more than 5000 supporters from all corners of Hamilton.

Since Minister Mulroney announced she was halting Hamilton LRT in mid-December, we have gained 1000 additional supporters and received hundreds of comments which demonstrate the strong community desire to see this transformational investment reinstated. Comment after comment received strongly urges Premier Ford to reverse this reckless decision and get LRT back on track. We have compiled the comments and attached them for your reference.

We have also attached some pertinent background information the Task Force should consider in their deliberations. This includes the actual facts behind the costs of Hamilton LRT, the central reason cited by the Minister for cancellation:

All of this indicates that the decision to cancel Hamilton LRT was made on a false premise. Even the Minister's instance to now cap the investment in Hamilton at $1 Billion, leads to the question, what about Hamilton's other $2.65B?

You are charged with the task of recommending transformative transit investment for Hamilton. We urge you to learn from the more than 12 years of analysis and research that went into planning Hamilton's LRT.

Between the business case, feasibility analysis, and other planning documentation, the conclusion was crystal clear:  LRT is the best transformative investment for Hamilton.

We hope that you too will come to this conclusion in your deliberations and through your recommendations, help provide the space for the provincial government to reverse their reckless and disastrous decision and get Hamilton LRT back on track.

The Hamilton LRT is an important part of the cities growth. Today with housing affordability being the issue that it is, many people are commuting around more over moving. I truly believe that stopping this project will only hinder Hamilton's economic growth and project in less tax revenue for Ontario.