The City's LRT plan has $3.4 billion in federal & provincial funding. Show your support for the plan.

In response to this new funding commitment, they have written an open letter and taken out a full-page ad in the Hamilton Spectator to endorse the plan and urge City Council to accept it. 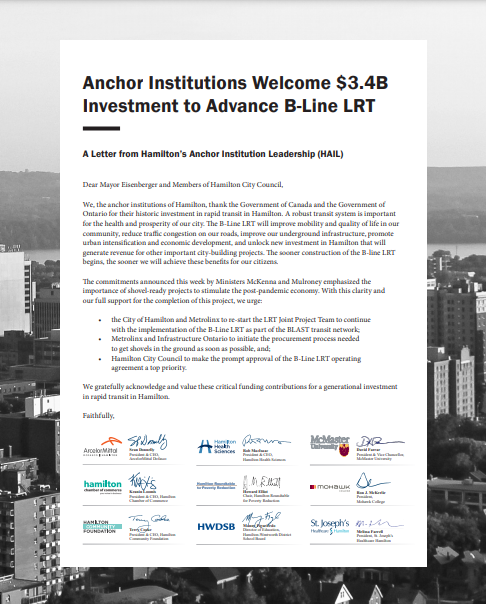 Following is the full text of the letter:

We, the anchor institutions of Hamilton, thank the Government of Canada and the Government of Ontario for their historic investment in rapid transit in Hamilton. A robust transit system is important for the health and prosperity of our city.

The B-Line LRT will improve mobility and quality of life in our community, reduce traffic congestion on our roads, improve our underground infrastructure, promote urban intensification and economic development, and unlock new investment in Hamilton that will generate revenue for other important city-building projects. The sooner construction of the B-line LRT begins, the sooner we will achieve these benefits for our citizens.

The commitments announced this week by Ministers McKenna and Mulroney emphasized the importance of shovel-ready projects to stimulate the post-pandemic economy. With this clarity and our full support for the completion of this project, we urge:

We gratefully acknowledge and value these critical funding contributions for a generational investment in rapid transit in Hamilton.

Hey I very frequently take HSR from DUNDAS to Hamilton General Hospital for work. I very much support the light rail initiative.
My son had an accident last year and was wheelchair bound for 6 months - thankfully recovering now. It really shone a light on what life is like for people who use wheelchairs and mobility issues. LRT would be a massive help as they board at the same level as the vehicle, no more driver assisted ramp requirements, or only 2 wheelchair capacity like most busses have.
You can definitely tell from how people voted in Ward 13 for Mayoral election - we voted overwhelmingly for mayors who support LRT.

Full Steam Ahead on LRT
In a resounding 11-3 vote, Hamilton City Council voted today to approve the Memorandum of Understanding (MOU) with Metrolinx to build the Hamilton LRT.

Important LRT vote coming up
On September 8, Hamilton City Councillors will vote on the Memorandum of Understanding (MOU) with Metrolinx to implement the fully-funded LRT.

Another Step Closer to Hamilton LRT
Have no doubt: this important vote would not be possible without your dedication and resilience for such a long time.